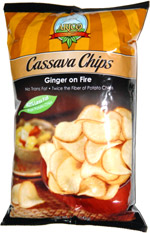 Taste test: These thinly cut cassava chips had a nice crunch to them and an excellent flavor, as the mild flavor of the cassava worked well the an intense ginger flavoring.

They also looked cool, with a golden yellow color in the middle with a brownish ring around the edges. There wasn't any of the heat we expected from the "on fire" name, but all of our tasters were still quite thrilled with the taste of these chips, and people grabbed them by handful, quickly emptying the bag.

From the package: “Cassava grows much like potato and originated from the ancient South American civilization thousands of years ago. Its cultivation spread to other parts of Latin American, Asia, and Africa. Today cassava is consumed by millions around the world and is relatively unknown in North America. Cassava provides twice the fiber of the common potato and when prepared as a snack chips has a delightfully satisfying flavor and a light, crispy addictive crunch.”