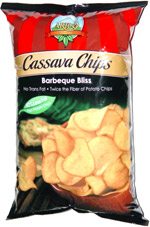 Taste test: These cassava chips had a thin cut and felt light upon biting in, with a light, sort of crumbly crunch.

They were quite tasty. They also looked impressive, as they had a bright glow to them, with an almost orange-like yellow in the middle and some browing around the edges, just a neat look. The only real negative was that the bag was difficult to get open, which delayed us from being able to eat the chips.

Smell test: Sort of sweet barbecue-like, but very different from most barbecue chips.

From the package: “Cassava grows much like potato and originated from the ancient South American civilization thousands of years ago. Its cultivation spread to other parts of Latin American, Asia, and Africa. Today cassava is consumed by millions around the world and is relatively unknown in North America. Cassava provides twice the fiber of the common potato and when prepared as a snack chips has a delightfully satisfying flavor and a light, crispy addictive crunch.”