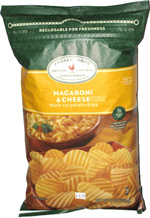 Taste test: These potato chips were wide rippled, thick cut and medium-yellow in color, with just a bit of skin showing on some of the chips, but there was none of the bright orange color that I would expect from the typical mac & cheese. But looking at the picture of a bowl of mac & cheese on the bag, it was the same color as the chips pictured, the white cheddar kind rather than fluorescent orange, so I'll give them a pass on the color thing.

I crunched into several chips and found that they were quite crunchy and extremely crisp, so the texture was excellent, but the taste disappointed, as there wasn't much in the way of mac & cheese flavor. The flavor was definitely all-potato at first, and there was a hint of cheese aftertaste with some of the chips, but just a hint, and not even with all of the chips. The potato taste was actually very good, but I was expecting some serious cheese, and Archer Farms didn't deliver.

From the package: “Enjoy the ultimate comfort food — in a chip. We start with thick, hearty slices of crinkle-cut potatoes cooked to a crisp then seasoned to perfection with the flavors of pasta, rich, creamy cheese and butter.”