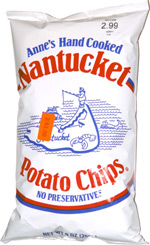 Taste test: These are OK but nothing great.

I think they're supposed to be kettle chips. They're kind of like Cape Cod chips, but not as good. They just don't have as much crunch or flavor. They're also not shaped as peculiarly as Cape Cod chips.

From the package: “One night several years ago, a few good friends from Nantucket, who also happen to be in the food business, were sitting around Straight Wharf discussing the fact that the Island deserved a better potato chip than the one being imported across the sound from the Cape and which at the time was being made by a subsidiary of a big beer company from St. Louis. The result of the converation is the hand cooked kettle chip which has been sold in limited quantities on Nantucket and around Boston for about ten years and now more generally throughout New England. We hope you like them.”

This snack was discovered by Keith and Melissa.