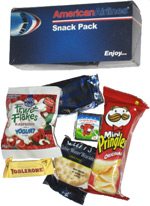 Taste test: This blue box contained a 23g package of Mini Pringles; a bag of Fruit Bowl Fruit Flakes Raspberry with a Yogurt Coating; three Carr's Table Water Biscuits, along with a 17.5g square of La Vache Qui Rit (The Laughing Cow) cheese and a plastic spreading knife; a small Toblerone bar; and a packet of four Oreos.

I started with the Pringles because, as I've said many times before, it's all about the chips! The Mini Pringles tasted kind of bland when eating the first one, but flavor grew what I ate several in succession. Next I opened up the crackers and the cheese block and spread some cheese on the crackers. The cheese was easy to spread but the taste was definitely on the bland side, and the crackers were about as bland as possible. Then I had two of the Oreos. You would think that four Oreos would not be enough, but it actually seemed like a lot in this case. (I ended up spreading out the other two Oreos between the other remaining courses.) Next I opened open the Fruit Bowl Fruit Flakes, and I found that they were quite good, sweet and smooth with lots of raspberry flavor. I finished things off with the mini Toblerone, which tasted good and was just about the right size, given the large volume of sweet foods I had already eaten. The items in this box were not all outstanding, but all of it was edible, and the various snacks went together reasonably well.

This snack was discovered by Marie aboard American Airlines. Review published September 2007.