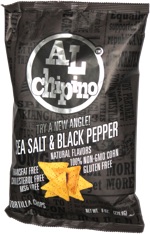 Taste test: We've had lots of snacks boasting a black pepper flavor, most of them potato chips, but it's a real rarity among tortilla chips, so this snack from India sounded like a new combination. The smallish, triangular chips had a yellowish orange color, with just a bit of fine black seasoning on the surfaces.

We crunched in to find a nice soft crunch and a hint of the expected black pepper, but there were clearly some different spices present as well, bringing the flavor into the realm of other snacks from India. It wasn't a strict salt-and-pepper taste, but it was still a very nice one, a tasty new take on tortilla chips.