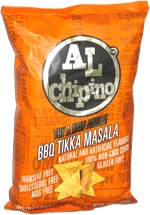 Taste test: These tortilla chips looked remotely like Doritos, but their triangular shapes were a bit smaller and lacked the pattern of dark marks typically seen on the surfaces of Doritos. They still had the somewhat wiggly surfaces, and even the mix of yellow and orange looked a whole lot like Doritos, with a good helping of loose powder on the surfaces. The BBQ Tikka Masala flavor that they promised sounded very un-Doritos-like.

I poured myself a small plate of chips and crunched in to find a light, crisp and somewhat brittle crunch, with a tangy barbecue flavor that had some of the tikka masala spices, but it was fairly mild when compared against other Indian spiced chips, so there was plenty of corn taste as well. There was some hot aftertaste, but again, that was pretty mild. Very nice flavor, a good one!

From the package: “Product of India” ... “US of A has no official language. But who wants to talk when they have the crispiest tortilla chips to munch!” ... “Wanna bet these chips are more addictive than the chips in Vegas” ... “Our secret recipe tortilla chips our made with a medley of spices from the world over. These ultra-crispy chips have crossed many borders to enter the land of amazing opportunities and curious taste buds.” ... “Tastes like the flavors of barbecued cottage cheese (paneer) in a tangy tomato marinade.”