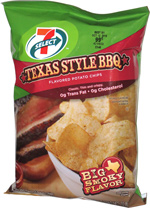 Taste test: We discovered this flavor along with Carolina BBQ and Memphis BBQ on the snack shelves of 7-Eleven.

Upon opening the bag and comparing it with the others, it was clear that Texas had the least visible seasoning of the three kinds, with just a light smattering of dark powder on the otherwise light yellow chips.

The bag promised a "big smoky flavor," but when I crunched in, it unfortunately was not to be. The flavor was good, but it was not all that smoky. To the minor degree to which it was smoky, it just wasn't a big flavor — it was fairly mild. Nothing bad about the taste, but under the circumstances we expected a lot more, so it was underwhelming.

Smell test: Not much, mostly we could just smell the potato (though it was nice).

This snack was discovered by Jeremy at 7-Eleven. Review published June 2015.