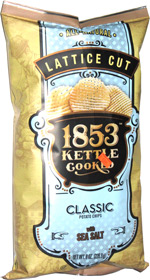 Taste test: These potato chips had a dual narrow-ripple cut, with the top and bottom of each chip rippled at different angles.

This created a pattern of holes where the ripples intercepted. We first saw this type of cut from Cape Cod chips (with the same Sea Salt flavor), branded as "Waffle Cut" instead of Lattice Cut. The bag included chips in many different shapes and sizes, with mostly smallish chips and a handful of larger ones. The angle between the two cuts varied from chip to chip. The chips were super-crunchy, definitely a step above most conventional ripples chips. They were also quite tasty, with lots of fried potato flavor. They kind of reminded me of the taste of potato sticks, but these were less greasy than those. Our tasters were big fans and went through handful after handful.

From the package: “Who says they don't make them like they used to? When confronted with a whiny diner who wan't happy with the cut of his fries, Chef George Crum responded like a true American. He went back to the kitchen and came out with the world's first batch of potato chips. That was 1853. And no one has complained since. Today the ingenious simplicity of Crum's creation lives on in every bag of 1853 Kettle Cooked Chips. We start with farm-selected potatoes, slice them thick, and cooked them slow in small batches. The result is a chip that delivers hearty potato flavor and a satisfying crunch that George would undoubtedly be proud to call his own.”