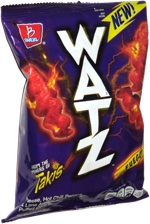 Taste test: Just like the other two Watz cheese puff flavors (Lime Tornado and Cheese Shock), this bag prominently mentions that it's "From the makers of Takis," so for Takis fans, that's a very enticing thing. The other ones failed to impress in the flavor department, but as actual new flavors, that didn't rub off too much on my esteem for Takis. This time, however, the Fuego flavor was taken directly from a very popular version of Takis.

The puffs had a reddish orange color, but not as intensely red as Takis Fuego, nor as shockingly bright as the Lime Tornado Watz.

I bit in to find the same somewhat odd cheese puff feel as the other Watz, with an immediate hit of hot peppers that was fairly similar to the Takis. It wasn't an exact Fuego match, and at times, the flavor reminded me (in a good way) of some other brands of hot cheese puffs, with their tasty combination of hot peppers and cheese. A nice taste and a hot one, this was the best of the three Watz.