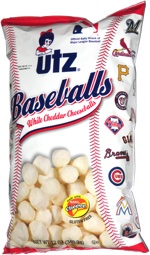 Taste test: When I saw this bag, my first though was, here we go again. We previously reviewed an Utz product called Snow Balls — excellent white cheddar cheese balls, a top-notch product. Since then, we spotted an Easter-themed product from Utz called Cotton Tails, but since it appeared to be the exact same snack in a different bag, it didn't seem worth a review. I was ready to reject this one outright, but then I thought, hey, it's baseball, and Taquitos.net has a category devoted to baseball snacks, so, what the heck.

I opened the large bag to find a whole lot of not-quite-spherical cheese balls with an off-white color — but no attempt to add the red stitches of a baseball to the surfaces. So they were indeed the same as the Snow Balls. They met the same high standard with an excellent strong white cheddar taste and light, crisp texture.

The bag did help to point out the odd situation with snacks and Major League Baseball. It proclaimed Utz to be "Official Salty Snack of Major League Baseball" and had the logos of all 30 teams, divided up between the American League and National League. But you definitely won't be finding Utz at all of their home ballparks. For example, if you go to Fenway Park, there is no Utz — the home of the Red Sox has been strictly a Frito-Lay shop since 2016, and before that, their snacks were all Wise. Yankee Stadium used to be a place where you could eat Utz, with a large Utz billboard in the outfield, but the billboard is gone, and they've also gone exclusively Frito-Lay. So you can apparently be the official snack company of all of baseball, but be entirely unavailable at some of the most visited ballparks.

From the package: “Official Salty Snack of Major League Baseball”

This snack was discovered by Jeremy at Market Basket. Review published August 2018.