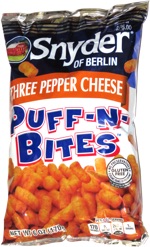 Taste test: These snacks took the same form as the cheeseless Salted Caramel version of Puff-N-Bites, with tater tot-like shapes, but this time they promised actual cheese, and not just one kind of pepper, but three! The surfaces had a bright orange color, with some tiny green spots that were presumably the peppers, but you really had to look for them to spot them.

We crunched in to find a nice light, crisp crunch with a very tasty mix of cheese and peppers. The peppers weren't extremely hot, but eating several pieces in a row did bring a nice mild burn that enhanced the cheese taste and lingered for a while. Very good!