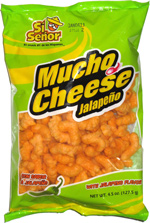 Taste test: These hot cheese puffs had odd shapes that were sort of a cross between cheese puffs and puffcorn, with generally the curl of a puff but some odd edges along the way. There was a light orange color overall, with just a bit of darker seasoning interspersed among the orange.

I crunched in to find a some what styrofoam-like texture, not so crisp, but the puffs did kind of melt in the mouth after being bitten into. The cheese taste was mild and pretty good, but there was plenty of jalapeño to go along with the cheese, especially in the aftertaste. The heat got fairly intense after eating several puffs in a row, and the heat lingered even after enjoying a cold beverage. Zesty.

Smell test: Can of an unusual sort of sweet cheese smell. No jalapeño.