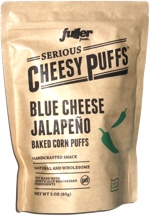 Taste test: These puffs had a pale yellow color with some dark bits that I assumed at first were jalapeno green, but upon close examination, they were barely green at all, maybe sort of an olive green. The puffs were fairly thick, and most pieces were straight or had just a subtle curvature. Many of them were quite long — a 3+ inch puff is far longer than your average one.

I crunched in to find a crisp, light crunch on the first bite, but the feel was slightly styrofoam-like after that. The cheese flavor was pretty mild, not really reminding me of blue cheese much, but it changed in the aftertaste with a nice mild kick of heat. I was hoping for quite a bit more cheese, as well as a real blue cheese and jalepeño taste, so the taste was a bit disappointing, but the puffs were still pretty good.

Smell test: Strong cheese smell, but not particularly like blue cheese or jalapeno.