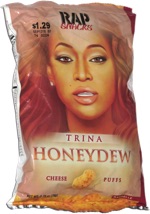 Taste test: It's very rare to find any honeydew-flavored snacks, but this wasn't even the first honeydew-flavored one from Rap Snacks, and indeed it wasn't even the first honeydew-flavored cheese puff from Rap Snacks. The difference here was that while the previous ones, referenced a rapper named Magic, these were branded by Trina. (The other kind used the term "cheese curls," but both were of the puffed variety.) Since it's been 15 years since that last review, a new face on the bag seemed like plenty reason to review this one.

The curls looked like fairly typical cheese puffs, except with minimal curvature on most pieces, a mildly bright orange color and a very, very light smattering of darker bits. We crunched in to find a nice crisp, light crunch and a tasty flavor that mixed savory and sweet, a fruity taste that could pass for being similar to honeydew. It was a long time since eating the last one, but based on a re-read of the review, it seemed likely to be the same flavor — and still a very good one — even if the bag had an entirely different rapper on it.

This snack was discovered by Jeremy at Tejeda Family Market, Mattapan. Review published .