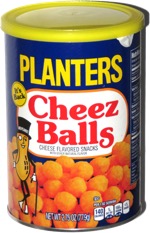 Taste test: Before cheese balls took over the planet, there were just Planters Cheese Balls, which stood out from most snacks by virtue of being sold in cans. They were delicious, and they were addictive. And then they were gone.

For years, snackers have lamented the loss of Planters Cheez Balls. They made a brief reappearance in 2000 in tiny bags that de-emphasized the Cheez Balls brand for Cheez Mania.

Nowadays, there are more kinds of cheese puffs than ever — we've reviewed more than 350 kinds, with at least 20 of our spherical snack reviews being cheese balls, including one that came in a similarly shaped can. But that didn't lessen the excitement of snack fans when they heard that Planters Cheez Balls were returning.

We opened the can to find that cheese balls had a fairly bright orange color and an airy look, with many small gaps on the surfaces. The shapes weren't quite spherical, as they were more like smaller versions of tater tots. We crunched in to find a nice crisp feel with a loud-ish crunch and a brittle texture. There was a good cheese flavor, but it was less cheesy than I expected. I had to eat several of them in a row (okay, that's an understatement what I actually did) to build a whole lot of cheese in my mouth. A solidly good cheese ball.

From the package: “It's Back”

This snack was discovered at Jewel-Osco, Chicago. Review published January 2019.