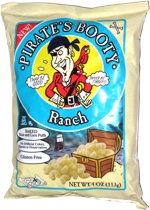 Taste test: This version of Pirate's Booty had a pale yellow color, with some areas a bit less pale, plus some dark green seasoning bits scattered over the surfaces. The shapes varied a lot, with some C-shaped, some almost like spirals and lots of other random shapes as well.

Most of the pieces had a nice crispy crunch (some were softer). The mix of the corn/rice puffs with buttermilk and ranch seasoning was pretty tasty. The ranch had a little kick to it at times, a big change from the original Pirate's Booty.

Smell test: A bit different from the usual ranch smell, but still ranch-like.

From the package: “Baked Rice and Corn Puffs”