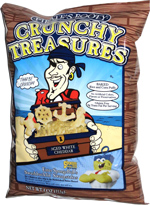 Taste test: This version of Pirate's Booty departed from the original in a big way. Instead of random weird shapes, the ones in this bag were shaped like some nautical/pirate-related things. Or at least, they tried to make them that way.

Of the four shapes shown on the bag, one was obviously a boat's steering wheel and another an anchor. As for the other two, I really had no good idea from looking at the front of the bag or the puffs themselves — one seemed like a + sign and the other maybe a boot — but the back of the bag helped, as it identified them as the "X Marks The Spots" and "Crunchy the Parrot." Even for the wheel and anchor, the shapes didn't much resemble the ones pictured on the bag. The anchors were misshapen in various ways, so some looked kind of like anchors, other less so, while the Steering Wheels looked more like snowflakes.

I crunched in to find a good crispness and light crunch, for a texture that fell in between cheese puffs and crunchy cheese curls. A bit crunchier than the original Pirate's Booty. The cheese flavor was mild and pretty good. The puff material and cheese stuck to the teeth quite a bit.

From the package: “Ahoy, treasure seekers. It's time to chart your course for a swashbuckling adventure! While Spongebob and his best mateys attempt to retrieve the stolen Krabby Patty recipe, the pirate and his first mate Crunchy are enjoying a treasure hunt all their own! Baked with simple, delicious ingredients, our Aged White Cheddar Crunchy Treasures come in four arrr-some shapes: Crunchy the Parrot, 'X' Marks The Spots, Anchors and Steering Wheels.”