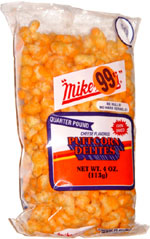 Taste test: These looked sort of like popcorn, but they were actually cheese puffs that were somehow made into that shape.

They tasted pretty good, similar to other cheese puffs such as Jax, with a good amount of cheese. The level of cheese coating seemed to be less consistent than on your standard cheese puff, probably due in large part to the irregular shape.

Smell test: Smells like cheese puffs, such as Jax.

From the package: “No hulls! No hard kernels!”