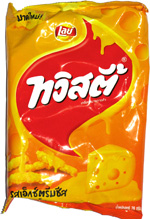 Taste test: This bag had a small Thai variation of the "Lay's" logo, but the larger Thai version of the Twisties logo won out, as these were actually cheese curls, not potato chips.

They had generally the same shapes and texture as Crunchy Cheetos, but most of the pieces were fairly small, with none of the huge "Cheeto de Milo" pieces that we always hope to find in a bag of Cheetos. The color was yellowish orange, but much more on the yellow side than orange. The taste surprisingly was not just cheese, as mentioned in the name and depicted on the package with the huge block of cheese, along with cheese dripping off the Twisties logo. To the contrary, it was bacony cheese. The flavor was quite good, as all of our tasters liked it.

From the package: “Frito-Lay and Twisties are the registered trademarks of PepsiCo Inc. Purchase, New York” ... “Product of Thailand”

This snack was discovered by Jeremy at ebay. Review published November 2010.