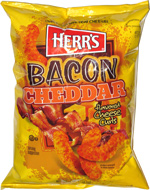 Taste test: These cheese puffs had lots of bright orange seasoning, plus some large specks of green, with generally not much curvature in their shapes.

They had an excellent soft-but-crisp texture, and they were pretty tasty, with lots of cheese flavor and middling level of bacon. Most of our tasters liked these and found the mix of cheddar and bacony flavor quite good. Some were a bit less impressed, citing the fakeness of the bacon taste as a negative. The fake bacon had an upside as well: One of our snackers saw this bag of cheese puffs and poured some for himself, but then saw the "Bacon Cheddar" label and realized that he couldn't eat them, since he keeps kosher. After being told that they probably don't contain actual bacon, he checked the bag and found that not only was there no bacon, there was no meat of any kind, and indeed the bag was actually certified as kosher and dairy. So he did eat them after all.

From the package: “Herr's® presents a sizzling new twist on the classic cheese curl. Herr's® Bacon Cheddar Flavored Curls deliver the unmistakable flavor of smokehouse bacon combined with the creamy sharp tang of fresh cheddar, for a taste you can't refuse and a crunch you can't resist.”