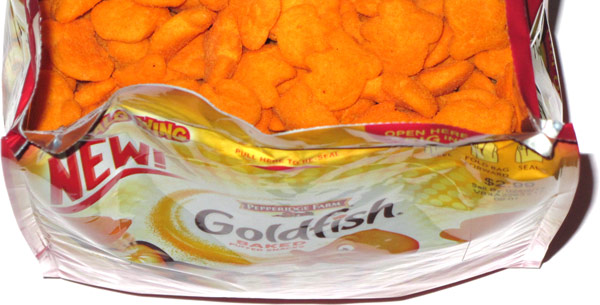 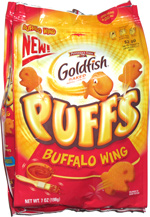 Taste test: Having had much experience eating Goldfish, I was quite intrigued when I spotted Goldfish Puffs at my local supermarket. Puffs? Did that means they'd be really big? That they were more like cheese puffs? The large bag dwarfed the standard Goldfish bags, so I was thinking big as I opened the bag. I peered inside to find that they were actually about the same size as the cracker fish and had a similar orange color, but they looked quite different. Most pieces were thicker, the fishes' mouths were more pronounced (cut away rather than just indented into the snack) and the tails had a different shape. But the really important difference was the ingredients, as these were made from corn meal instead of wheat.

I crunched in to find that the Puffs were fairly dense, with a cheese puff type of feel, crunchier than most puffs and less crunchy than curls. The Buffalo wing taste was pretty good, but just slightly hot. The texture very nice — the corn-based material felt snappier than the wheat-based crackers. Unlike the crackers, which leave relatively little residue on the fingers, these had a lot of powder on them and left lots of it behind. Pretty good.

Smell test: Like a Buffalo wing sauce, but pretty ,ild.

From the package: “New Goldfish Puffs. The snack that's puffed extra crunchy and packed with big, bold flavor for an awesome snack that's fun to hang out with!” ... “SealTab® is a proprietary trademark of SPC Resources, a Sunoco company.” ... “Do not purchase if package is open or torn”