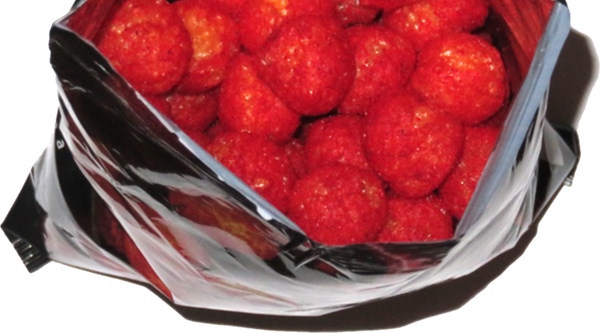 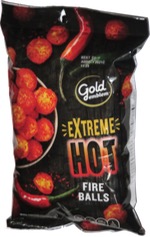 Taste test: These cheese balls were fairly standard in size and had a bright red color over most of their surfaces, with some hints of yellow from the underlying corn puff occasionally showing through.

I crunched in get two surprises in rapid succession. First was the feel, which was crisp and light as air, noticeably lighter than most cheese balls. But before I had a chance to absorb that surprise, the other surprise (which should not have been a surprise) hit — these things were seriously hot. I'm a bit cynical after reviewing lots of hot snacks, because usually the claims like "Extreme Hot" are vast exaggerations. This time it wasn't. Just one piece was enough for an impressive burn, and it was tasty too. Have a cold beverage handy!

From the package: “Gold Emblem Extreme Hot Fire Balls are the perfect snack for those who like to turn up the heat. Incredibly addictive after the very first crunch, you won't be able to put them down as you revel in glorious fiery goodness bite after flaming hot bite.”

This snack was discovered by Jeremy at CVS Health. Review published December 2020.