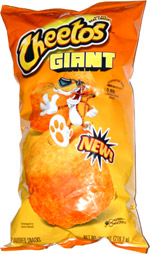 The bag said that snackers probably can't get one entire piece into their mouths at once, but I had just minimal trouble trouble doing so. (Maybe that makes me a bigmouth.) Once I got it in there, it was definitely a lot of Cheeto. There was a pretty good cheese taste, plus a lot of corn puff taste from the vast cheeseless interior. The crunch level was somewhere between the level of Cheetos Puffs and Cheetos Crunchy.

Eating a piece all at once was a bit of a challenge, so for some of the puffs, I went with the gnawing method. Cheese levels varied from one piece to the next, but the ones with a lot of cheese were pretty good.

Our tasters were quite impressed by the size of the Giant Cheetos, and they liked the taste and texture. So even with quite a bit of food in a single Cheeto, they kept coming back to the bag for more.

From the package: “It's the big cheese taste you've waited for your whole life in a big cheese flavored ball. In fact, it's so big, we bet you won't be able to fit it all in your mouth at one time! But whatever you do, don't be stingy. Your friends will want to share in the fun too. Giant Cheetos® snacks. Dangerously cheesy® taste in a dangerously cheesy® ball!”

This snack was discovered by Jeremy at Wal-Mart. Review published March 2009.