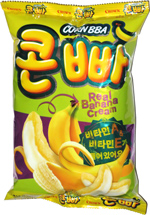 Taste test: We've reviewed lots of unusual snacks over the years, but this one was particularly unusual.

I opened the bag to find that the cheese puff-like snacks inside were shaped like bananas, which was a bit unexpected, but probably shouldn't have been, as the front of the bag did show a banana-shaped puff. The bag design dramatized it a bit by showing that puff coming out of a banana peel, but still, the puffs themselves looked very much like the one pictured.

I grabbed my first piece and noticed another unexpected twist: I felt something moist and slightly sticky. It turned out that one edge of the puff had a thin stripe of yellow banana frosting (which I probably should have expected, as a close look at the picture also showed the frosting, plus there were the words "Real Banana Cream" on the bag).

There was a soft feel and good crispness to the puffs, along with a nice sweet banana flavor from the frosting stripe. We shared these with lots of snackers, and most liked the taste a lot, though there were some who were very turned off by what they described as a fake banana flavor.

From the package: “Real Banana Cream”