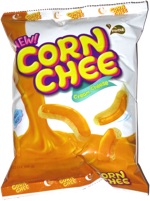 Taste test: This was one of several snacks from Crown to take a bare corn puff (without cheese) and add a stripe of frosting to one side. The substantive difference here was while the other ones took a cheeseless cheese puff and frosted it with something other than cheese, this one actually put cream cheese onto the otherwise cheeseless puff.

The puffs didn't much resemble what was shown on the bag, as the cheese frosting was much lighter in color than the caramel color shown. The taste wasn't bad, nor great, and it really didn't remind me much of cream cheese. The unfrosted part of the puff was kind of bland, and the frosting had a slightly tangy flavor.

From the package: “I want more!” ... “Fondue, Swiss cuisine by giving food into cheese or sauce. CornCho, Fondue snack by dipping savory corn snack into cream cheese~” ... “Special Features! 1. Upgraded CornCho with soft and rich cream cheese from Denmark! 2. Cream cheese may melt on a hot day! 3. Corn germs which look like black dots on the snack are edible~"