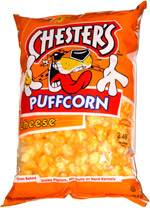 Taste test: This is the Frito-Lay version of Puffcorn, which is basically a cheese puff shaped sort of like an oversized popcorn kernel.

We've previously tasted similar products other snack companies, including Mike-Sells Puffcorn, Ballreich's Cheese Puffs and Shearer's Cheese Corn Puffs. Chester's version of Puffcorn seemed to have a slightly styrofoamy texture but it also had quite a lot of cheese, and after biting in, the styrofoam-like feeling didn't last long, as the entire Puffcorn melted in the mouth after a single bite. Out tasters were mostly impressed by these.

Smell test: Very strong cheese smell, similar to Cheetos, but just on the border of being too cheesy.

From the package: “Oven Baked” ... “Unlike Popcorn, No Hulls or Hard Kernels” ... “A Corny Poem from Chester Cheetah: Chester's™ the name, and Snackin's my game. These Puffcorn snacks are sure to gain fame. They're the puffiest, popable bites, from the north to the south ... With a crunchy corn taste and absolutely melts in your mouth. So taste for yourself this most cheesy treat. I'm sure you'll agree there's no other puffcorn to eat!"”

This snack was discovered by Jeremy at Wal-Mart. Review published June 2008.