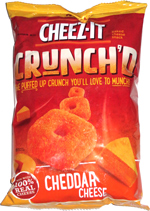 Taste test: When we spotted this bag on the snack aisle shelf, what immediately came to mind was a relatively recent product innovation from Goldfish.

A few years back, the farmers at Pepperidge Farm spun off a corn-based line of Goldfish Puffs from their wheat-based Goldfish crackers. Same general shape, but puffier. But when we checked the ingredients here, it turned out that these had both wheat and corn (with more wheat than corn) so the analogy didn't quite work.

We opened the bag to find that they looked kind of like square-ish, extra-fat, orange-colored Cheerios. Or square nuts. Sizes varied a bit, but generally they were about three-quarters of an inch square and a bit under half an inch thick. The pieces were was supposed to resemble a puffy version of regular Cheez-Its, with their square shape and hole in the center, but really they didn't, because (among other reasons) this hole was way bigger than the tiny hole in a real Cheez-Its.

We crunched in to find a good solid, crisp (but not hard) crunch, for a nice texture. The good news ended there. Unfortunately, the puffs did not taste like Cheez-Its really at all. Even more unfortunately, they didn't even taste good. Not horrible, spit-out awful, but just kind of a not-so-good cheese taste. Almost every cheese puff on the market tastes better than these.

Cheez-It missed the mark completely here: When they changed forms, they didn't deliver the Cheez-It taste that their customers crave, while in their failed attempt to match that flavor, they didn't even produce a good example of a cheese puff. A major fail.