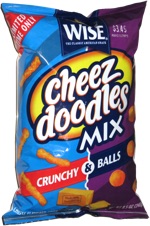 Taste test: Four years ago, we saw cheese puff behemoth Cheetos (Chester Cheetah, CEO) bring innovation to the category by putting four different shapes of puffs/curls in the same bag, with mixes flavored as Cheezy Salsa, Flamin' Hot, Xtra Cheezy and P41. Cheez Doodles from Wise might be four years late, including only two shapes — the previously reviewed crunchy curls and new-to-us Puffed Balls — rather than four, having just one flavor, and doing it only as a limited edition, but at least they have finally joined the multiple-kinds-of-puffs game!

The bag was filled quite nicely to very near the top, and from the first glance inside, it appeared that the contents were 90% or more cheese balls. The balls were fairly sizable and had lots of cheese and a nice lightly crunchy texture with excellent crispness. As we dug further into the bag, there were indeed many crunchy curls, and they were also loaded with tons of cheese while bringing a more solid crunch. By sheer numbers, the balls still seemed to dominate. Eating either or both kinds proved to be a very satisfying cheese experience. Very good!

From the package: “Limited time only” ... “Oops! Or maybe not ... What's better than cheese? You got it, more cheese! It seemed like a mistake at first, but having Cheez Doodles Crunchy mixed with Cheez Doodles Puffed Balls in the same bag is this is the perfect cheesy combination.