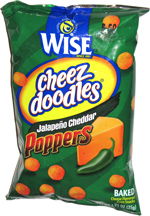 Taste test: These fairly large, roundish cheese puffs had a good helping of bright orange seasoning, but unlike many similar snacks boasting both jalapeño and cheddar, there was no green to be found when we opened the bag. A much closer look at the puffs revealed some very tiny dark spots, but not many of them, and they were so small that it was hard to tell that the were green.

We crunched in to find that the relative lack of green didn't really mean anything as far as taste, because these things packed quite the jalapeño kick. The feel was crisp and not particularly soft, for a very nice texture. The mix of cheddar and intense jalapeño was really tasty, and the contrast of cheese and hot pepper made it hard to stop eating these. Excellent!

From the package: “Cheez Dudes®” ... “Keep on Poppin! Us Dudes are kickin' it up a notch with this little ditty. Cheese and Spice unite in these bite-sized puffed snacks to deliver complete sensation satisfaction. Grab a handful and join the excitement.”

This snack was discovered by Jeremy at Key Foods, Brooklyn. Review published March 2014.