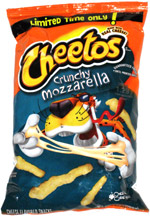 Taste test: Mozzarella cheese is not among the types of cheeses that I expect to go well on a snack.

Most of the time when I'm eating mozzarella, it's on top of a pizza, in baked ziti or as part of mozzarella sticks as a deep-fried appetizers at a chain restaurant. I've never really thought of mozzarella as a stand-alone cheese. (I'm sure many people eat mozzarella by itself, but I'm just not one of those people.) So classifying the taste on these Cheetos was hard. The taste wasn't horrible, but it was not awesome either. The saving grace was that these were still Crunchy Cheetos, so the crunchy nature of the core snack was still there. These also tasted saltier than the regular Crunchy Cheetos.

Smell test: Not a great smell, but after a few whiffs it smelled like a plate of spaghetti.

From the package: “Ahhh Mozzarella! You already know how good it tastes. But the beauty of these Cheetos Mozzarella flavored snacks is that they combine the gooeyness and fun of Mozzarella Cheese with the Dangerously Cheesy Crunch of Cheetos brand. As the Italians would say ... Buon Appetito!”

This snack was discovered by Keith at CVS Health. Review published January 2009.