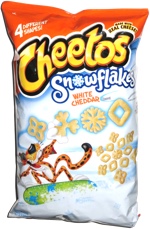 Taste test: After selling Giant Cheetos Snowballs in some previous years, which were notable more for their size than shape, Chester Cheetah decided to try some special shapes for this year's winter edition. There were four different shapes in the bag, but only one of them had the six-way symmetry that makes up an actual snowflake. The surfaces had a light yellow color, with a fairly even, light coating of off-white cheese powder. They looked wintery.

Shapes aside, I've gotta say, these were really good cheese puffs. They had a very light, almost melty feel in the mouth, with excellent crispness and the softest crunch upon biting in, plus a delicious white cheese flavor. Just about as good as cheese puffs can get!