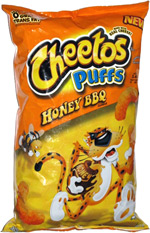 Taste test: This new flavor of Cheetos had the same thick, puffy shape as the regular Cheetos puffs but looked different, as the orange was slightly darker and didn't have the bright glow that we've come to expect from Cheetos.

We crunched in to find a nice crisp texture and a tasty flavor that was definitely different from regular Cheetos. If I had to guess the flavor's name based on the taste, I would probably have guessed something other than Honey BBQ, but the taste was good and these were kind of addictive.

From the package: “Grab hold of the succulent honey & tangy BBQ flavor. Napkin not included.”

This snack was discovered by Jeremy at Market Basket. Review published July 2011.