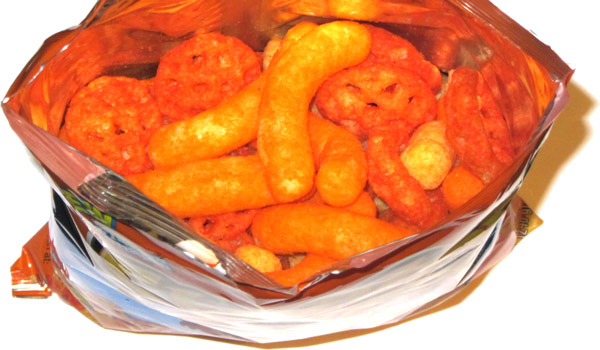 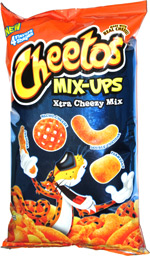 Taste test: This new creation from Cheetos broke the longstanding practice of including just one shape of Cheeto per bag, as they included an unprecedented four different shapes of Cheetos, each with a different flavor.

A few years back, Cheetos had some versions — dubbed Mighty Zingers — that had two different flavors in the same bag, such as Crazy Cheddar & Wicked Picante and Ragin' Cajun & Tangy Ranch, but even those didn't use different shapes.

Two of these four kinds, Cheddar Crunchy Curls and Double Cheddar Puffs, were standard Cheetos, while two new inventions rounded out the bag: nacho cheese flavored round grids and parmesan-flavored mini puffs. The distribution in the bag was quite uneven. Most of the bag was filled with the large puffs, as there were also quite a few of the round grids, many of the much smaller parmesan mini puffs, and very few of the crunchy curls.

The crunchy ones had the same texture as they do in their standalone bag, but they seemed to be less cheesy in both appearance and taste, so there was more toasted corn and less cheese. The large puffs were more cheesy by comparison, and they were supposed to be "Double Cheddar" versus the separate bag of those. This bag provided separate ingredients for each of the four kinds, so I compared the ingredients of the Double Cheddar against the regular Puffs, and they turned out to be very close. They reversed the order of Whey and Cheddar Cheese, putting the cheddar first in the "Double Cheddar Seasoning" and second in the "Cheese Seasoning" but I couldn't taste much difference, as they only seemed double cheddary because there was relatively little cheese on the crunchy curls. The parmesan puffs had a much lighter color than the others, but some of the orange from the other kinds had rubbed off onto the yellow. There was some parmesan taste, but not enough to really stand out. The round nacho pieces were fairly large and had a much darker orange color than the others. They had good crisp crunch, and they really did taste like nacho cheese, with some slight zestiness. They were the best part of this mix, and the whole thing worked pretty well to provide lots of cheese and a less monotonous Cheetos experience. 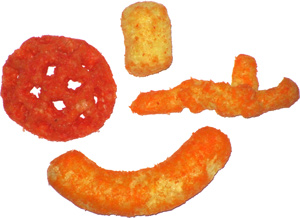