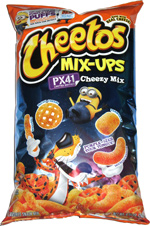 Taste test: This special version of Cheetos boasted the novelty of turning your tongue purple by eating cheese puffs. The bag contained the same four kinds of Cheetos as the Xtra Cheezy Mix-Ups: standard crunchy ones and puffy ones (known as "Double Cheddar Puffs"), plus stubby parmesan puffs and nacho cheese grids. The colors were also the same, at least out of the bag, with no purple in evidence. The PX41 name first brought to mind the long-gone limited-edition X-13D Doritos, but it turned out that PX41 is a reference to a character in Despicable Me, not just some intentionally obscure-sounding code.

At first glance, the bag made it appear that the purple effect was supposed to apply to all four kinds, but a careful reading seemed to imply that only the Double Cheddar Puffs do the purple thing. It didn't specifically say that the other three kinds don't, but it also didn't say that they did. What it did say was that you should eat five of the Double Cheddar Puffs to get your tongue purple. It's kind of gross to look at people's tongues when they're eating cheese puffs, but we did anyway, and there was just the slightest hint of some sort of light color, not noticeably purple, probably not even enough for anyone to notice at all if they weren't looking for purple. It was nothing like Chester Cheetah's dark purple tongue on the front of the bag. We tried holding one of the Double Cheddar Puffs under running water to see if that brought out the purple. It did not; some small green and red spots did appear, while the bulk of the surface remained orange.

For the folks at Frito-Lay to tell you to eat a whopping five Double Cheddar Puffs — in a bag where you need to dig around among three other varieties to find that kind — to see the purple effect, they must have known that the purple would be minimal at best. They brought these to market anyway, setting themselves up for failure. As as far as the purple goes, they failed. Still a nice mix of cheese puffs to eat, but there was just about no point in getting this special limited edition bag instead of the Xtra Cheezy Mix-Ups.

From the package: “Purple-izes your tongue!” ... “Unleash the colorful purple effect by eating 5 double cheddar puffs in a row.”