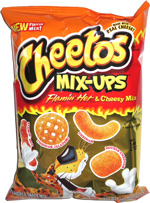 Taste test: This latest addition the the Cheetos Mix-Ups line had the same four shapes of Cheetos as the Cheezy Salsa and Xtra Cheezy versions, with a different lineup of flavors. Two of the four were standard-issue Cheetos that can be purchased separately — Flamin' Hot Curls and Cheddar Puffs — while the other two were newly created flavor/shape combinations just for this mix: Double Cheddar Mini Puffs and Jalapeño Cheddar Grids.

There wasn't a lot of color variation in this mix, as 3 of the four had close shades of bright orange, but the Flamin' Hot ones were much redder than the others, and the grids did have some small bits of green within the orange.

The Puffs were far and away the biggest pieces in the bag. (The pictures of the four kinds on the front of the bag were deceiving, as they were not all done to the same scale.) I crunched into a few of those Puffs and found the expected good crispness and soft feel, with lots of cheddar, including lots of powder that stuck to my fingertips. The small Mini Puffs were certainly smaller but didn't taste all that different, even if they were supposed to have twice the cheddar. The big draw here was the Jalapeño Cheddar Grids, which were round on the outside and gridded in the middle, but there weren't that many of them. They did have a different taste than the other kinds, with some reasonably zesty jalapeño flavor, but it came with only a slight bit of heat. Thankfully, the Flamin' Hot ones were quite a bit hotter and delivered some real heat. It wasn't that hot of a mix overall, as the not-hot and not-that-hot stuff made up the majority of the bag, but there was a lot of cheese, some heat and a good variety of textures.

Smell test: Good cheddar smell, but not much in the way of heat.

This snack was discovered by Jeremy at CVS Health. Review published March 2015.