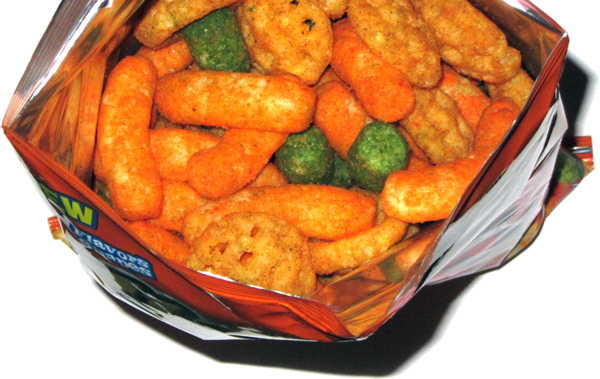 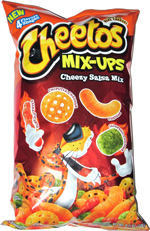 Taste test: This spicy variation of the Xtra Cheezy Mix followed the same path of having four different shapes in the bag (the same four shapes) and four different flavors, with three of the four flavors being spicy ones in this case. It also provided a wider range of colors than the Cheezy version, offering a rare green Cheeto. As far as colors go, this was a very attractive mix, with a nice contrast between the four kinds: light orange, round and grid-filled Chipotle Cheddar pieces; bright orange Cheddar puffs; green Jalapeno Cheddar mini puffs; and dark red Salsa Picante crunchy curls.

All were quite tasty. The Chipotle Cheddar pieces seemed subtle at first, similar to the Nacho Cheese version of the same shape in the non-spicy mix, but there was some definite kick in the aftertaste. The Cheddar puffs were pretty much standard Cheetos Puffs, but they did provide some non-spicy contrast to the other three spicy flavors. The smallish Jalapeño Cheddar puffs had a definite jalapeno flavor to go along with that green color, with some mild heat in the aftertaste. Finally, the Salsa Picante curls were quite tasty, with a mild hot pepper salsa kick.

From the package: “Salsa Picante + Jalapeño Cheddar + Chipotle Cheddar + Cheddar” ... “It's a dance for your taste buds!”

This snack was discovered by Jeremy at Market Basket. Review published February 2013.