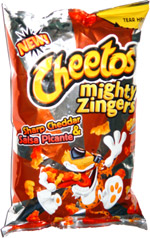 Taste test: This bag contained miniaturized versions of Cheetos, more of a nugget shape than the Crunchy Cheetos irregular sticks, with a mix of light orange pieces and dark red ones. Both colors were impressively bright. The Zingers came in all sorts of shapes and sizes, but on average they were about half an inch in their longest dimension. The orange Sharp Cheddar pieces seemed to outnumber the red Salsa Picante ones.

Both kinds were very tasty, as the cheddar ones at first reminded me of the regular Cheetos, but after eating a few I was convinced that the cheddar was indeed sharper. The Salsa pieces had a mild kick of heat. Our tasters were very impressed by the taste. I liked the fact that they listed the ingredients for the two kinds separately on the back of the bag (though there appeared to be some cross-contamination of seasonings among pieces, so even if I grabbed just orange ones, I couldn't completely avoid the salsa taste). The bag also featured a new innovation for Cheetos, as the top right corner was made to be ripped off. This worked quite well as it provided an appropriate-sized spout for pouring our a handful of Zingers. And that was good, because I really enjoyed eating these by the handful (repeatedly).

Smell test: Very nice. Mostly toasted corn rather than the spices, but I really liked it.

From the package: “Don't call them small. These tiny Cheetos® snacks are mighty in taste. The sharp cheddar will make your taste buds take notice, and the salsa picante is too rowdy to resist. Together these Cheetos® snacks create a cheesy flavor that'll shove your tongue around. Their numbers will amaze you. Their tastes will astound you. There are endless ways to enjoy this mixture of mightiness. Sort them, combine them, but don't underestimate the power of Cheetos® Mighty Zinger™ snacks.”

This snack was discovered by Jeremy at Market Basket. Review published March 2010.