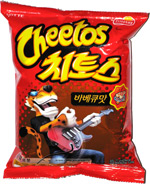 Taste test: These were one of the more controversial snacks we've tried in a while.

Many of our regular tasters nearly revolted after we fed them these, because they found the taste to be, well, revolting. Things started out well with a bold bag design featuring an impressive depiction of Chester Cheetah doing a guitar solo. We opened the bag to find snacks in the usual Crunchy Cheetos shape, but with an overall pale yellow color, plus some brownish areas. This was one of those cases where some people refused to even crunch into one piece. Those who did were for the most part very down on the taste, with words like "terrible" coming up a lot. Some people did like them, though. The bag showed a small picture of some steak or maybe a pork chop on a grill, and we got the Korean words on the bag translated as barbecue, but it really didn't taste much like any BBQ flavor we've had. It was a mix of sweet and tangy spices, but a much different one than what we're used to.

Smell test: Kind of odd, but maybe a little like soy sauce.