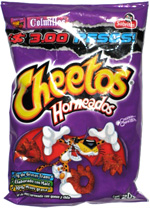 Taste test: This Mexican version of Cheetos was shaped like Chester Cheetah's four-finger paw (but oddly, with a hold in the middle of the palm) and had a very dark orange-brown color.

The dark color told me that these would be spicy, and indeed they were, as the flavor packed quite a bit of chili pepper and lime kick. The taste and heat bore no relation to the Flamin' Hot varieties of Cheetos. There was a mild crunch, and the dark flavoring did stick to the fingertips a bit.