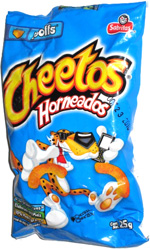 Taste test: These puffed Cheetos were thinner than the typical puffs we've come to expect from Cheetos or Jax, and they were also shaped differently, as they were nearly straight sticks (with some minor wiggles) rather than being quite curved.

I crunched in to find a soft texture, not quite melt-in-your-mouth soft, but not styrofoamy at all, with a great cheese flavor from the bright orange-colored seasoning. These were really tasty, just excellent. The bag was quite small, but it contained quite a lot of puffs, far more than we've come to expect from this size bag.