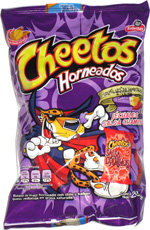 Taste test: This Mexican version of Cheetos was supposed to be shaped like vampire fangs, but they didn't off-hand look like fangs because they were very dark red in color, which is quite different from the white (or something close) fangs that you tend to see on any vampire who sees his dentist twice a year. The shape was reasonably fang-like, and the size was about an inch long, which was reasonable to use as fangs to hold up to your mouth. Some of our tasters saw the shape and instead though that they looked like some body part other than fangs (which we won't mention). We crunched in to find that the puffs were crisp and soft, with lots of very hot and spicy seasoning.

The unusual thing about this bag of Cheetos was that it also included a packet of hot sauce — labeled as Salsa Colmillos (Spanish for fang salsa) on the front and Salsa Picante on the back. The salsa packet was a first for Cheetos that we're aware of, and it was a bit strange because the puffs were already plenty hot. We poured the packet out into a dipping dish to find it was also quite dark, almost the same color as the puffs. We dipped a few pieces into it, and was fairly hot, though no hotter than the puffs, with a bit of sweetness as well. The dip was kind of unnecessary, but it was good.

From the package: “¡Échales Salsa Chamoy!”