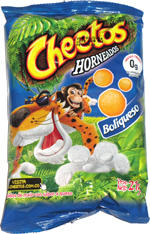 Taste test: These cheese balls from Colombia had shapes that were a bit lumpy on the outside but still mostly resembled spheres, and they were fairly large at just under an inch in diameter. They had a bright orange color typical of Cheetos, much brighter than the balls depicted on the bag.

I crunched in to find a crisp and fairly soft texture, with a great mix of corn and cheddar flavor. The feel was quite light, and the cheese was really tasty. They were the first kind of Cheetos we've tried that had a monkey on the bag along with Chester Cheetah. Very good!