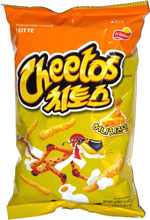 Taste test: These Cheetos looked a lot like the regular Crunchy Cheetos in terms of shapes, but they had a light yellow-orange color rather than then fluorescent that Cheetos is best known for. The front of the bag showed some honey being drizzled onto a big wedge of cheese, so the expectation was some combination of honey and cheese.

Of the many variations of Cheetos that we've eaten over the years, few have offered something sweet to go along with the cheese. The only one with honey was Honey BBQ, but these turned out to be quite a bit different than those.

The ingredients said that there was some "Cheese Flour" in there along with the "Honey Flavor," but the cheese was hard to notice. The flavor was kind of like a sweet corn on the cob. We shared these around with lots of snackers on the beach, and just about everyone who tried some was both surprised by the taste and quite happy about it.