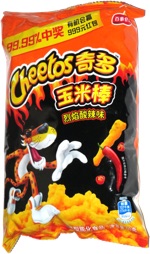 Taste test: This version of Flamin' Hot Cheetos from China had similar shapes to the American Flamin' Hot Crunchy Cheetos but a much lighter color, with a light orange overall look punctuated by some sparse darker seasoning bits.

I crunched in to find a great crisp feel and light crunch, with a taste that was more tangy than hot initially, mixing together sour, sweet and hot for a very tasty combination. The heat lasted longer than the other parts, hanging around for some zing in the aftertaste. Based on the taste and Ingredients list, these were evidently cheese-less Cheetos. Great mix of tastes here!