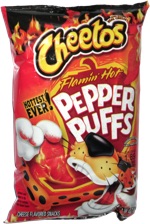 Taste test: This new version of Cheetos piled on some major hype for its heat level, claiming to be not just the hottest type of Cheetos ever, but the hottest of any Frito-Lay product in the United States. The puffs had a very bright, intense red seasoning on their surfaces, and they were shaped like some sort of short, stubby chili peppers — though neither the bag's marketing copy nor the Ingredients identified which particular pepper(s) powered the heat.

Because of the promised high heat, I had some cold lemonade at the ready before opening the bag. I poured a whole bunch of them onto a plate and crunched in. For the first few, I noticed a dense feel and fairly strong crunch, along with a tasty hot flavor that did indeed seem stronger than standard Flamin' Hot Cheetos, but still it wasn't any kind of extreme heat. For that first puff and the second one, a good sip of lemonade seemed to temper the heat nearly completely. I liked them enough that I ended up eating every one of the ones on the plate, and in the process, the heat quite sneaked up on me, to the point that my tongue was really quite on fire. We're not talking anything like Carolina Reaper heat, but it was hot enough that I really needed something to cool it down. Lemonade provided only temporary cooling — soon after, it seemed just as much on fire. So I got some chocolate milk, which was more effective but still left me with a hot, lingering aftertaste.

Smell test: Cheesy smell, but not hot at all, didn't make my mouth water.

From the package: “Hottest ever!*” ... “*Hottest ever product in the Frito-Lay portfolio in the United States.”

This snack was discovered by Jeremy at Circle K. Review published June 2020.