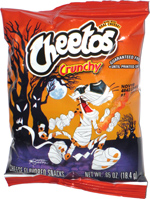 Taste test: This small bag of Cheetos came in a bucket multi-pack as part of a Halloween promotion. It's been many years since we wrote our review of Crunchy Cheetos, so we decided to review these to confirm those impressions, while checking out what sounded to be an exciting package.

The Cheetos inside were indeed crunchy, with a nice crispness, lots of cheese and a nice mix of corn and cheese flavor — just as we remembered. When we turned out the lights, there wasn't much glow if any from the bag. So we left the bag out under bright lights for a while to soak up some light, then took it to a pitch black area to try again. The Cheetos logo, all the white parts of Chester, the moon and the faces on the trees did indeed glow green, but even under ideal conditions, it was very dim, barely noticeable.

We've had other glow-in-the-dark stuff that was way, way brighter, so Chester Cheetah under-delivered here, and we were not impressed. But we still liked what was inside the bag a lot.

From the package: “Charge bag under lights for spookier glow!”

This snack was discovered by Jeremy at Target. Review published November 2013.