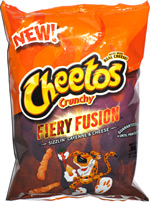 Taste test: This ambitious flavor of Cheetos (released along with an identically named Doritos flavor) looked mostly the same as the regular Cheetos, though maybe the orange was a little less bright-orange and more red.

Our snackers generally liked the taste but were mixed in their evaluations of the heat. Some people found it to be fairly intense, while others thought it seemed like Chester Cheetah tried but failed with the hot flavoring, with fake spices that tried to taste like hot peppers but really weren't hot.

From the package: “Sizzlin' Cayenne & Cheese” ... “Chester's at it again! This time combining the smooth flavor of cheese with a burning blend of hot cayenne, jalapeno and spices in new Cheetos® Fiery Fusion™ snacks. It's a spicy sensation!”