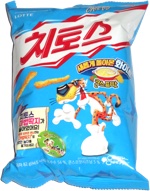 Taste test: This version of Cheetos had the same irregular shapes as the cheese-loaded Crunchy Cheetos, but with a light yellow color, plus a very, very sparse application of some small, dark seasoning bits (just a few bits per piece, at most).

We crunched in to find a light crunch, less crunchy than we're used to from Crunchy Cheetos, with a taste that was a lot like corn soup or creamed corn, though probably a bit sweeter than the actual soup would typically be. No cheese in these Cheetos, but they were tasty and good.

From the package: “Product of Korea”