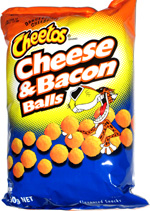 Taste test: These roughly spherical snacks were a dull orange in color, not nearly as bright of an orange as some Cheetos varieties we've tried. They weren't quite ball-shaped, as they were more like stubby tubes with rounded ends.

I crunched in to find a crisp but very soft texture, really an airy feel. Though the outside was orange in color, it didn't appear to be covered in cheese powder as most Cheetos are. I liked the taste and couldn't stop eating them, but the bacon seemed too subtle at first. As I ate more and more, I noticed how real the bacon tasted — still not strong, but for what it was, a good fresh bacon taste.

This snack was discovered by Jeremy in Australia. Review published April 2012.